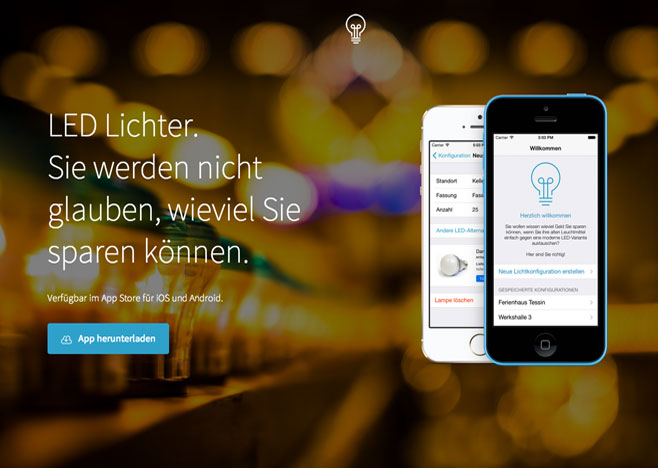 I was approached by Michael König in the spring of 2014 to develop an iPhone application that lets electricians manage the planing and construction of LED lighting in buildings. When a building is slated for renovation or modernization, the app lets electrians mark the position of existing light sources, take photos and notes and specify its type. The app then suggests modern LED replacements for current incandescent light sources, constructs a bill of material, feeds the information back into the company’s ERP system and lets both the electrian’s managers as well as the building’s proprietors monitor the progress of the renovation.

I was responsible for the design and development of the iPhone application, the server backend and the customer-facing web portal. The server also interfaces the company’s ERP software. Mr. König needed the app to be particularly user-friendly. It was important to him that new users of the app will be able to use it right away without time-consuming (and expensive) upfront training. To achieve this goals I constructed the app mostly without custom UI elements and user interactions already known to a regular iOS user from Apple’s own apps. Whenever a custom UI element was indispensable it mimick as much of iOS’ native user experience as possible.

The software is a proprietary in-house application and will be distributed within the company via Apple’s iOS Developer Enterprise Program. It is currently in beta testing and will be released to the individual electricans later this year.